Dan Hollings Review – The “Wiggle Factor” Report… Is It Worth 1 Hour of Your Valuable Time?

As part of our series of Dan Hollings Reviews, we look at the heavily promoted “Wiggle Factor” report and see whether it is really worth your time and effort reading it, and what you can hope to get out of it. You might be surprised…

The following is an edited version of the video transcript…

I’ve uploaded the PDF of the “Wiggle Factor”, or the “Wiggle Report” as it was originally called, that you no doubt have been absolutely bombarded with the recent promotion of The Plan.

The reason I’ve put it into this flip book is so I can quickly scan through it and give you my opinion on why this particular report is really not all that great. 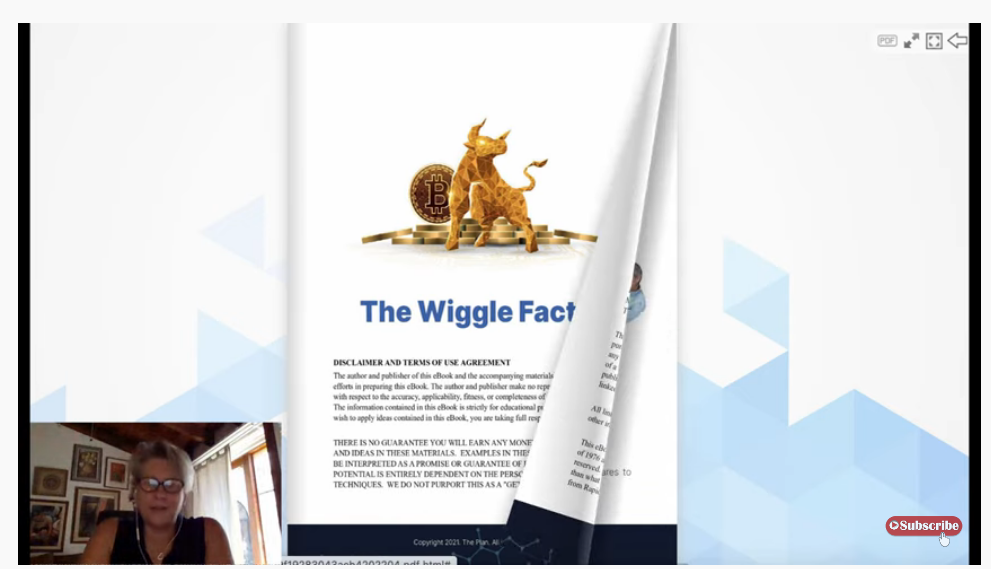 It was at the start, I think when nobody knew about The Plan and it was a good description of how the program works to create daily cash flow from crypto, but so many people are now aware of The Plan and probably heard the story a million times over.

DAN HOLLINGS BACKGROUND & HOW THE PLAN CAME TO BE

In The Wiggle Factor, Dan Hollings talks about his background at the start of it – just giving the credibility on who he is.

He is a leader, he’s a pioneer. He’s been at the start of many great things over the last couple of decades, really.

And getting into crypto in 2017, it wasn’t exactly an early adopter stage for him. I mean, he was probably a little bit late to the party, to be honest, but it was at the start of what was known as the crypto winter in 2017.

He’s had lots of experiences, and I guess was really on a mission. He has got a very scientific, mathematical type of mind, and he is a very well-seasoned investor, having made a lot of money over the years. He just has a really amazing mindset for investing, but what it came down to is, with his trading partner Tony, they were literally testing all the settings that they’ve put together now for The Plan.

The Plan wasn’t going to be taught as such, but through friends wanting to get into crypto, he didn’t want to see his friends lose their shirts or lose too much money in crypto, because at the time things were sort of going a little bit crazy.

Anyway, it just went down this chain, and you’ve probably heard this story, whether you’ve watched the webinar or seen any of the promotional videos, and Dan Hollings ended up teaching the process to a number of friends and family members, so much so, The Plan became teachable to others.

So it wasn’t just Dan Hollings and his trading partner using the crypto bots to create cash flow. It became these handfuls of friends that he personally helped.

Then came a small beta group of individuals that paid over $10,000 to actually work with Dan Hollings one-on-one.

Then after those first 18 people had chewed up all of Dan’s time, he decided that they needed to leverage time by doing a group training program.

Nat and I were in that first group training program which was known as beta 1 of The Plan. At the time, The Plan did not exist in a pre-recorded course format like it is today, it was all taught live. 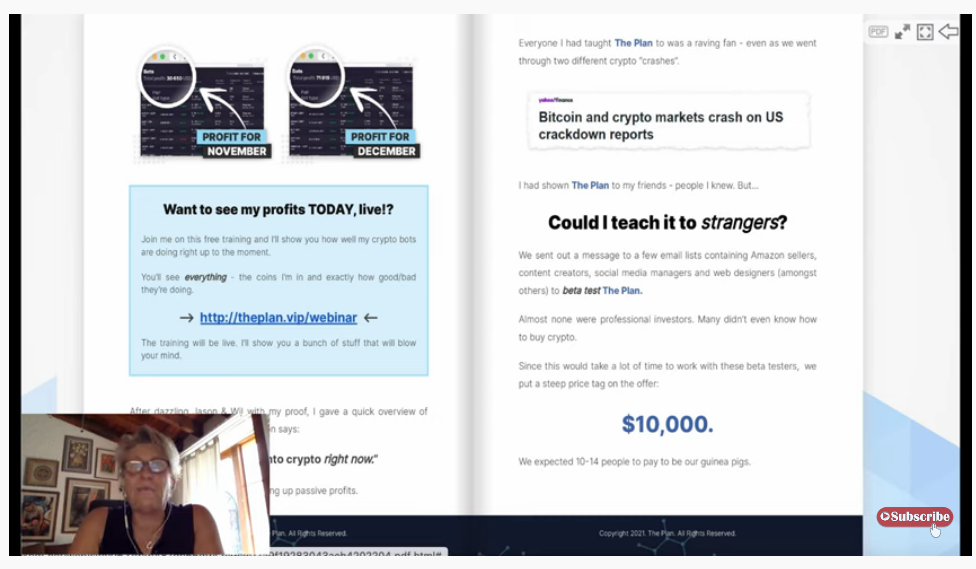 One thing that’s interesting about this book is Dan Hollings goes into detail about why crypto is the future. I don’t believe anybody who’s reading these posts here on the Roaming Income Girls is skeptical about crypto. It’s like you’ve either already heard about The Plan or you’ve already invested in crypto and you’re just looking at other options. If you’re all in on crypto, you’re already aware of it. So this sort of information is almost fairly irrelevant.

One thing that I do find quite funny is Dan Hollings talking about sending money overseas. It’s hilarious to somebody like us, who has been traveling the world for the last 10 years using segway accounts like Wise and Revolut, sending and receiving money from people all over the world in seconds, and all the different multi-currency cards available these days. The idea of sending money overseas is not hard by any means, but he’s kind of making it out to be.

What is interesting, of course, is how you earn money. In the crypto space, there are crypto savings accounts. There are not just wallets and exchanges. There are virtual banks as well, and that’s even before you get into the DEFI side of things. So it is possible to be earning  20% interest a year, or at least 10% in some of the stablecoin wallets that are out there.

So some of these topics are a little bit redundant as such. Maybe the ebook itself is literally designed for the total crypto skeptic. But I’m assuming that’s not you.

In The Wiggle Factor, Dan Hollings also talks a little bit about NFTs and where the space is at, but really, it’s the blockchain technology that is truly incredible. 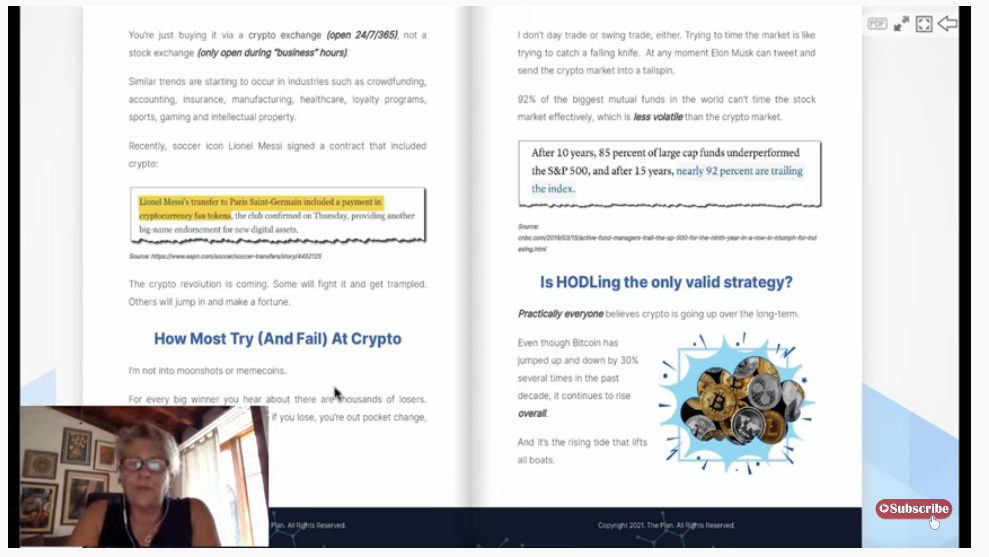 When people start to understand that, that’s when they really see the potential of where crypto’s going from an investment and asset perspective. It’s like you can’t go wrong!

There are different ways of being able to get into crypto, and Dan Hollings does talk about that in the ebook. He feels that most people try, and fail at crypto. But it depends on which way you come in. Generally speaking, at least the people I know, are just doing the common and smart thing, which is HODL’ing (Buying and holding for the value to eventually go up).

In the Wiggle Factor, Dan Hollings asks this question, is HODL’ing the only valid strategy?

And of course, it’s not!  There are lots of other valid strategies out there, but HODL’ing should be a part of absolutely everybody’s investment portfolio.

This is how people have invested in stocks for years. You buy what might be a blue chip stock, hoping that one day by the time you retire or by the time the kids need to pay for college funds, that stock is going to be worth more than what it is on the day you bought it. That’s really cool! And that is actually part of The Plan strategy. There is a HODL’ing section that is part of The Plan Strategy.

Even if you are newer to crypto, it is important to think outside of just what The Plan is teaching with these automated crypto bots.

The part that makes the most sense in this book, is the use of the real estate metaphor and how the daily profits of the crypto bots are kind of the equivalent of having a tenant pay rent. 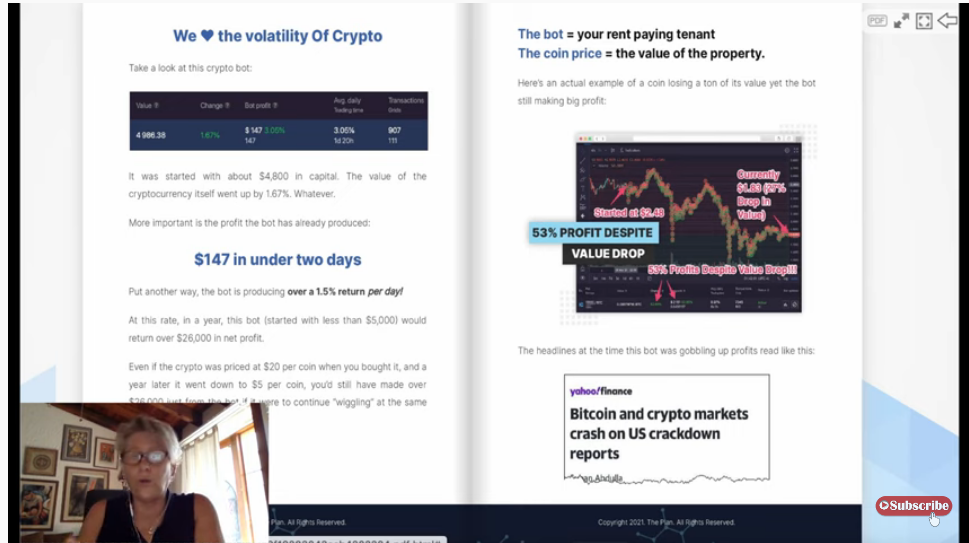 This is the fascinating stuff!

What is being taught in The Plan is literally not anywhere else out there with the ability to hold or HODL your own crypto, in your own exchange, that it is in your name, and only you can access it, but still make daily cash flow from it working for you, simply by subscribing to a piece of software called Bitsgap.

The Bitsgap software is enabling you to use Dan’s settings to be able to create these little mini-profit machines that are doing these micro trades on a daily basis.

Sometimes you’ll actually drop out of range of the grids as well. But now that we’ve been involved in this for almost a year, everybody who’s gone on this journey with Dan Hollings has been able to pick up more and more insights and knowledge and information about how to actually be strategic through these different markets.

Personally, I feel that getting started in a down market is super exciting! And that’s what we’re currently in at the moment.

So, that’s a quick look at the Wiggle Report, otherwise known as the Wiggle Factor. You can get a copy of it… just don’t think it’s going to be the next greatest thing to change your life. It’s not. It’s just a really brief overview, almost like a snapshot of what you’re going to get in the live webinar. 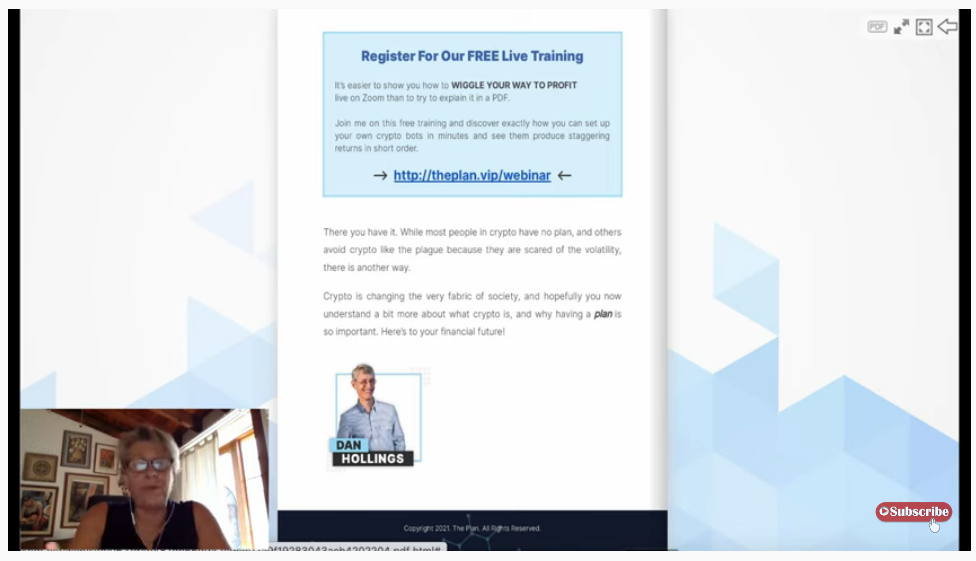 You can always come and ask us questions about The Wiggle report or The Plan webinar as well.

I’m assuming again, that you’ve probably already seen enough of what you need to know about The Plan. It’s just a case of timing when you’re going to get started.

When you join, we invite you to join via our affiliate link so you can come and be part of our Bot Buddies community.

Of all the people out there who are supporting The Plan and who are recommending The Plan, we are the only people providing twice-weekly live calls, on top of a community where you can actually chat with other members from around the world for 24/7 support.

It is such a big help being able to ask others if you’re just not entirely clear on one or two little items, or you’re second-guessing yourself about a certain thing, or you’re just still in that early stage of being quite fearful around crypto on a whole.

It is nice to know that you can reach out to somebody who’s been there before you and is able to help, or be a sounding board as well as being a little bit of extra guiding light. So you don’t just sit there on your own waiting for an email support ticket person to get back to you.

If you want to pick up the Wiggle Report, register for the upcoming webinar, take a look at our bonuses page, or you are ready to get started on The Plan – Simply click the green button below. As soon as the doors are open, you are welcome to come in! 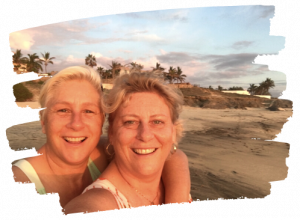 In 2012, we lost everything in a business startup in Dubai. Instead of going home to Australia, we started our full-time traveling lifestyle as international house sitters… with just $300USD to our name!

For 10 years we created digital products in the house sitting & the travel space, including our House Sitting Academy Program, and our Amazon Best Selling book “International House Sitting”.
Click on the banner below & grab a FREE copy while it’s still available… 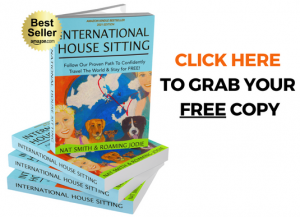 In 2018, we discovered our great love of crypto. We’re now semi-retired and love spending time helping others embrace this new financial system. 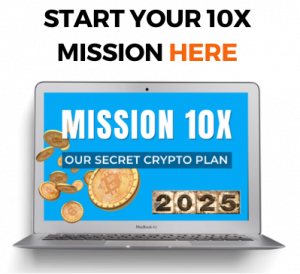 While you’re at it, why not subscribe to our Roaming Income Girls Youtube Channel, where we add regular videos on crypto, house sitting & earning a Roaming Income.

Want to be One of Our “Bot Buddies” Inside The Plan? 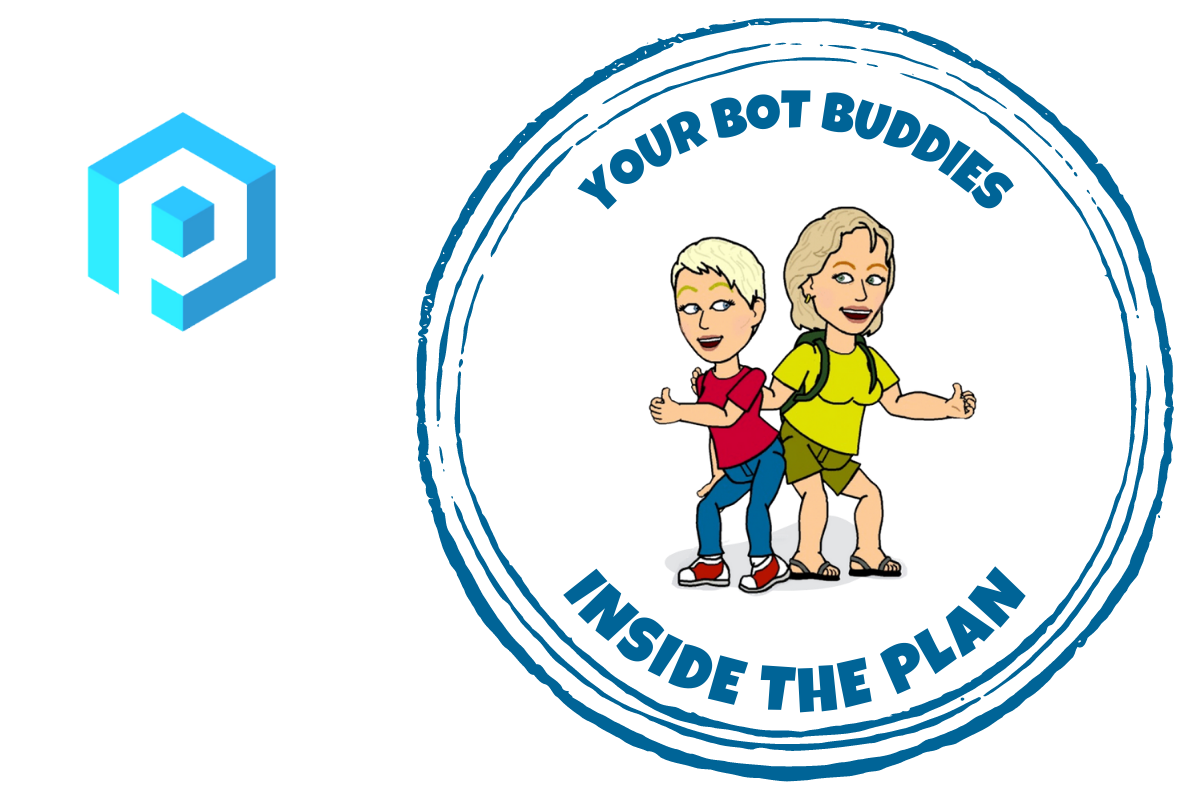 Yes, I Want to be a Bot Buddy Too!

This site uses Akismet to reduce spam. Learn how your comment data is processed.